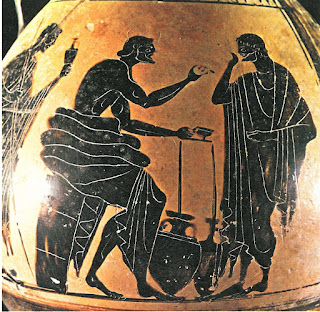 He must have been a sitter for any conman (or conwoman) – our lovesick hero – let’s call him Eubolides. He has fallen in love with a slave boy who works in the scent shop where he buys his perfumes (Athenian gents liked to smell nice).

“Can I pay you to give him his freedom,” he asks Athenogenes the owner. “Sorry, not on, replies Athenogenes, “he won’t go without his brother and his father Midas, who runs this highly profitable business for me.”

Eubolides is distraught and desperate to get the lad into his bed. Enter Antigona, beautiful ex-courtesan, now ageing but respected pimp-about-town. Knowing them both, she offers to mediate.

“I think, if you offer to buy or free all three slaves, you’d have a deal,” she says and names a sum, not cheap but do-able. Eubolides hustles round, raises the money by borrowing from friends and a meeting is arranged. Now what Eubolides doesn’t know is that Athenogenes has given Midas full responsibility for operating the shop and the slave has run up massive debts by borrowing for which his owner is responsible. So, surprise, surprise, looking worried, Athenogenes agrees to the deal but then says, as though trying to be helpful, “Look, have you thought, if you buy the freedom of the three slaves, it’ll just be money down the Great Drain. Why don’t you just buy the business?

“That way, you own the slaves and can do what you want with the boy and they could continue to work and earn a profit for you. If they go, I’ve either got to close it down or buy new slaves to run it.

Of course, you’d have to take over the liabilities as well as assets. There are debts to Pankalos and Prokles but they’re not much - the stock in the shop more than covers that - and maybe a few more. I’ll let you have it for the same amount.” Now, the fact that the price was the same should have been enough to warn Eubolides but, as I say, he’s lovesick and doesn’t spot any trickery. Antigona chips in encouragingly, “Sounds a good deal to me. It’ll give you a regular income.”

So he falls for it and signs, or rather applies his seal on the spot for – another surprise – Athenogenes just happens to have the contract, already drawn up, tucked in his cloak.Athenogenes hasn’t actually lied, just implied the debts were a lot lower than they really are. More important for him, debts are formally mentioned in the contract and that Eubolides takes responsibility for them.Now proud possessor of his love object and a perfumery business, Eubolides suddenly finds creditors banging on his door, chasing him for their money, and himself saddled with a massive debt on top of his own borrowings.

He approaches Athenogenes, now freed of a heavy burden and looking flush. “You didn’t tell me about all these other debts,” he whines. “Sorry, old chap, business is business. You should have read the contract more carefully.”Eubolides takes Athenogenes to court for damages and it is from his speech to the jury (written for him by expensive speechwriter Hypereides) that we know this. However, as Athenogenes and Antigona doubtless calculated, he hasn’t a leg to stand on. The law clearly states that contracts freely entered into between two citizens are binding.

“But that’s only ‘fair’ contracts,” he argues. “This contract isn’t fair.” And he cites instances in other areas of law where fair and unfair are differentiated.

Did the jury listen to him? We don’t know. But doubtless Athenogenes’ speechwriter will have found convincing counter arguments. Looks as though Eubolides is bankrupt.

And even now he doesn’t spot, even though he knows that the bigger debts are fairly recent, that Midas has probably been encouraged to take these loans specifically for the con, with Athenogenes pocketing (sorry, no pockets in a cloak – or were there?) after giving Antigona her cut – could it have been her idea? Eubolidesa is even more miffed that he slipped her 300 drachmas for her help. Talk about one born every minute!Deduced from a speech written by Hypereides on a papyrus rescued from the sands of Egypt – collections of legal speeches certainly had a wide circulation.
Posted by Roger Hudson at 11:48 AM No comments:

Five down on my blog book tour – breath sigh of relief. Tougher than you might think. Offering to guest-blog, negotiating the blog-sites and dates, writing the pieces sometimes needing extra research, sending it off, checking it’s all OK, visiting and replying to any comments, letting people know… Quite exciting though. Scroll down a bit for my blog with actual dates and links – you may have to go to Archive for relevant month for some.

Next date is April 8th on Nan Hawthorne’s Booking History with Stories Behind the Statues – a peak into the Athenian fashion at nanhawthorne.blogspot.com/

Then probably a bit of a break from it till May 31st with one on ancient cookery.

Busy week. I’ve been finalising the running order of poems in my new collection from Lapwing for one.

Then there’s setting up a poetry slam on April 30th as a major event in the Drogheda Fringe attached to the Drogheda Arts Festival. And liaising with my son over release of Irish gangster movie Trafficking which is lining up for May 21st.

Plus writing, email correspondence, keeping up with discussion groups, a bit of accounts and some PR. And getting distracted by fascinating inbox arrivals.

The bank holiday weekend was looking like a good opportunity to do a little gardening but, just when you thought it was safe to go back in the garden and having dared a short haircut, another cold spell arrives.

Should I, shouldn’t I?

But there are daffodils and daisies out, catkins on the big tree, leaves appearing on the rhubarb, and the grass is growing – well, there has to be a downside as the mowing chore rears it’s ugly head once again as a belated spring arrives. Great to hear the birds singing so joyfully again, though.
Posted by Roger Hudson at 11:47 PM 1 comment: