THE NOT-SO-PETTY CRIMINALS OF ANCIENT ATHENS

It seems that petty crime was no rare thing in Ancient Athens. There was even a section of the market area called ‘Thieves’ Market.

It may have been what we would call a flea market, where second-hand clothing and other goods are sold but one that also forms a channel for getting money for stolen goods. I bought a bicycle in one such in some years back, no questions asked.

Of course, no bikes in ancient times, so what forms of theft were there?

You could be mugged, of course. If you weren’t carrying money or things you’d just bought in the market, they’d take your clothes and leave you to go home naked.

They might even make you spit out any small change you had tucked away in your cheek (yes, that was normal in a time before the invention of pockets).

On the longer routes to other towns and villages in , these would be highway robbers or bandits.

If you went to the baths or the gym, as the wealthier men did frequently, you paid someone to keep an eye on your clothes, if you had sense, or a ‘cloakstripper’ would be rummaging them for any money or valuables you might have left with them.

And, doubtless, if you carried your money in a purse or satchel on a strap over your shoulder, that could be grabbed and made off with by any number of street urchins. No use reporting it to the police – there weren’t any.

The Scythian guards patrolled the central areas to keep order and might nab any blatant wrongdoer they spotted but, in the narrow lanes between market stalls, they couldn’t be everywhere.

Law rested really on victims grabbing (arresting) the thief before he got away and taking him to the authorities. Not much hope of that if the mugger was threatening you in a deserted alley with a club or a knife and there were two of him.

Mind you, if you came upon a burglar on your own property, you could take action even to killing him and be seen as justified – that’s if it’s at night: by day, you could only kill him if he resisted. Always, villains had to be caught in the act or such crimes were difficult to prove.

But, if wealthy houses had no ground floor windows and the street door was guarded by a porter with a dog, how did burglars gain access?

Simple. They dug a hole through the wall. Either from a lane beside or from inside an adjoining house. In the main, houses were built of sunbaked mud bricks, so not too difficult to chisel away at them when folks are all out, say, at a big religious festival or maybe all asleep.

Over the relatively low rooftops and down into a courtyard may have been another way in but not such an easy way out.

However, it wasn’t only the professional criminal that indulged in illegalities. The number of laws and inspectors relating to weights and measure, false coinage, and quality of foodstuffs gives a pretty good idea that such offences were rife.
But there are always ways round these things, like two sets of weights, one for when the inspectors are around, the other when they’re not.

You only have to look at the non-round shapes of coins that have been unearthed by archaeologists to realise how much clipping of the metal at the edges must have gone on even though value of a coin was determined by its weight.
If a customer had doubts, there was a public slave stationed in the market place specifically to test coins and weights.

What punishments did culprits face? Well, stallholders faced a fine but, as today, probably not high enough to be a real deterrent. It’s possible there was an equivalent of the medieval stocks and also a wooden device round the ankles that hobbled a culprit in the hope that the public ridicule that went with these would be enough to put people off.

In the case of more serious theft, it was the death penalty. In , that meant being shackled to a board somewhere outside the city gates and being left to starve to death. Pretty grim.
Posted by Roger Hudson at 8:53 AM No comments:

Posted by Roger Hudson at 8:45 AM No comments:

Posted by Roger Hudson at 8:49 AM No comments:

Posted by Roger Hudson at 3:20 PM No comments:

For all its reputation for noble philosophical minds, ancient Athens has to have been tops at political dirty tricks.

Dredging up past misdemeanours of opponents and getting the word round, or even making them up in rumours difficult to deny.

Charging opponents with embezzlement or defaming the gods or of taking bribes and then hauling them into court – again, it didn’t have to be true as long as it stuck.

Speeches in the Assembly were a good method, but ran the risk of being accused yourself of misleading the people (which was a crime), but graffiti was anonymous, so were dirty jokes and satirical songs.

Mind you, it had a long history with the Greeks. One of their great heroes, Odysseus, was noted for trickery and respected for it.

The Trojan Horse was his idea and here he is tricking the Cyclops by hiding under a sheep.

They even had a god of cunning. That was Hermes, who was also patron of thieves,oratory, poetry, sports, invention and trade, boundaries and travellers.

He was also messenger of the gods and played his own first trick when he was a baby.


All Athenian houses had a bust of him at the front door which featured in the dirty trick that destroyed General Alcibiades when he was accused of having vandalized scores of them when drunk – almost certainly organised by rival politicians.

Top political trickster has to be Themistokles, who features in my novel "Death Comes by Amphora".

His most successful trick was getting a false message to the invading Persian Great King Xerxes that fooled him into sending his fleet into the worst possible place for a naval battle where the Greek navy, led by Themistokles, slaughtered them.

Then, years later, when the Athenians chucked him out, Themistokles somehow persuaded the next Great King to give him a princedom, though we don’t know what false promises he may have made to get it.

Whatever they were (like offering to lead a new Persian invasion), it seems the only way he could get out of keeping them was to commit suicide.

In my novel, there are more cunning stunts that smack of Themistokles’ way of operating.

It looks as though Perikles learnt a lot from his example.

My novel "Death Comes by Amphora" is available on Amazon Kindle. 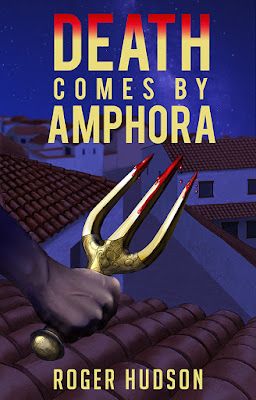 Amazon.com
Amazon.co.uk
Posted by Roger Hudson at 2:16 AM No comments: 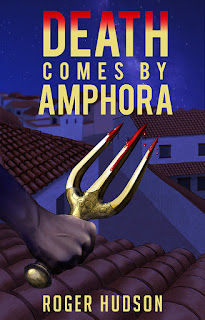 Amazon.com
Amazon.co.uk
Posted by Roger Hudson at 6:13 AM No comments: 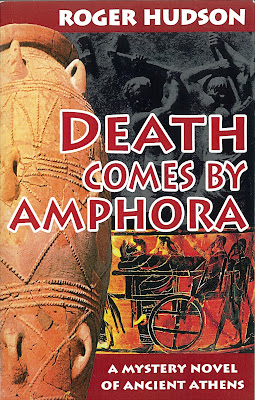 Well, that’s easy. I studied Ancient History at secondary school and got fascinated at mention of an Athenian politician called Ephialtes. He, it seemed, had brought in the reforms that led to the direct democracy of one man one vote of all male citizens. And that made possible the Golden Age of Athens led by Pericles or, as they would have spelt it, Perikles.

So an important guy. But this Ephialtes was then promptly assassinated ‘under cover of night’ and that’s all we were told.

What was going on here? Were the historians covering something up?, I wondered. It stuck in my head, so researching the novel was an opportunity to check it out for myself.

The answer was simple. Very little is actually known about Ephialtes. Apart from a tombstone indicating a state funeral, no mention of him before Aristotle’s Constitution of Athens , written some 130 years after the man died, and Plutarch’s Life of Pericles another 320 years after that and neither telling us very much. All the more reason for exploring what happened and what better place than a novel. Especially as lots more exciting stuff happened at about the same time. 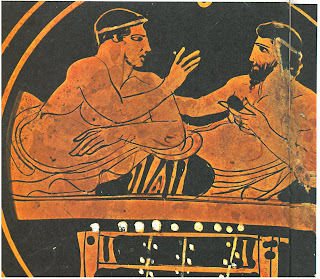 Ephialites’ reforms took power from the wealthy aristocrats and handed it to the poorer classes of shopkeepers, craftsmen and farmers – that sounds like a revolution in anybody’s language and revolutions are usually pretty fraught times.

Add that the top general and leader of the aristocrats General Kimon was voted into exile and that majority made possible by someone preventing four thousand aristocrats getting back from war in time for the vote. The danger of civil war must have been intense. 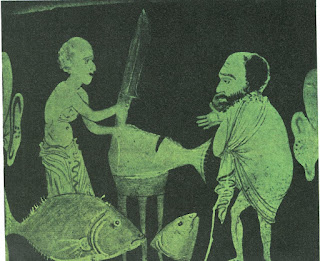 What would it be like to be in Athens then with your loyalties divided between both sides, aristocrats and workers, especially if you’re nosing around looking for the murderer of your rich uncle? 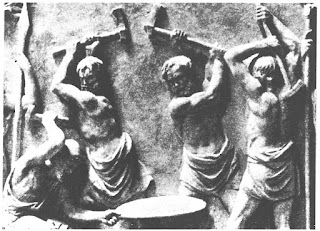 So look for a hero who is in that position – enter Lysanias, heir to that murdered rich uncle but brought up as an artisan and just 18. A bit young so give him an elderly slave and advisor – that’s Sindron.

A very segregated society, so how can these two investigate what the women are up to? If young Lysanias has to marry his uncle’s teenage widow, maybe she can look after that angle. So that’s my detective team.

Where did ideas for the plot come from? More about that in a later blog.
Posted by Roger Hudson at 3:28 PM No comments: